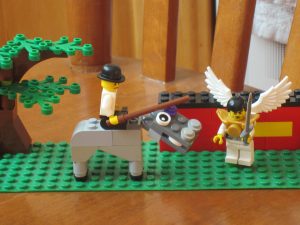 King Balak trembled with fear, thinking about the Israelites. He knew that their God had done miracles, and he wanted those people destroyed.  He knew of a man named Balaam who had the power to curse people.  Balak offered Balaam great riches to curse Israel so he could defeat them in battle.

Balaam said, “Even if you gave me a house full of silver and gold, I cannot go beyond the Lord’s word to do more or less.”  Maybe the idea of treasure was too tempting because he went to the king’s house anyway.

Balaam rode his donkey toward the King’s house, but God was angry with him. The angel of the Lord stood in the road with sword in hand. Balaam didn’t see the angel, but his donkey did. The animal turned off the road into the field.  Balaam beat the donkey for not obeying him.

Next, the angel appeared between two walls, so the donkey scooted against the wall, scraping Balaam’s feet.  In pain, Balaam yelled and beat the donkey again, so it continued down the road.

Finally, the angel stood in a narrow section between two walls.  The donkey saw the sword and knew it couldn’t pass the angel.  It laid on the ground and waited.  Balaam beat the donkey a third time, then God gave the donkey speech.

“Why do you keep beating me?” the donkey said.

“You have mocked me. I would kill you if I had a sword.”

“Don’t you ride me all the time and I’ve never done this before?”

Then God opened Balaam’s eyes. He saw the angel and fell flat on his face.

The angel said, “If your donkey hadn’t stopped, I would have killed you and saved her life. I will let you go to King Balak, but only speak what God tells you to speak.”

Balaam obeyed God, blessing Israel instead of cursing them. He lost the riches, but he obeyed God. Today as followers of Christ, we need to yield to the Holy Spirit. God deserves our obedience.

Can you think of a time you knew what God wanted, but you went your own way anyway?

What is the best way to know what God wants from you?