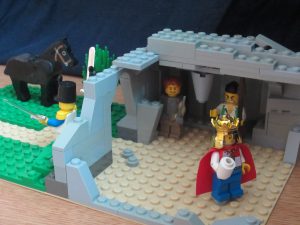 Jealous King Saul searched the kingdom for David.  God planned to make David the new king, because of Saul’s sin.  Even though David was innocent, Saul called him a criminal and gathered an army of 3000 soldiers to find and kill David.  Now, David was hiding in a cave with some of his men.

King Saul stopped his hunt because he had to go to the bathroom.  He decided to use a nearby cave. What he didn’t know was that David and his men were hiding in the same cave.

David’s friend whispered to him. “God put your enemy in your hands.  You can kill Saul right now.”

David had a choice. It looked like a good idea to his men. It looked like God had put Saul right into his hands. He knew Saul would kill him if he knew he was there.  What should David do?

When trying to make a choice, we learned four questions to ask.

David chose not to kill Saul.  He quietly cut off a piece of Saul’s robe.  He told his men he would never kill God’s chosen king. anointed. David would wait for God to make him king.

After Saul left the cave, David followed and called out, “Do you see, Saul? I could have killed you. Here is a corner of your robe that I cut off.  It’s proof that I would never harm you.”

Saul cried like a baby and realized David was more righteous than he was. Saul decided to stop trying to kill David and went home.

When you make decisions, do you think about what God wants?

If you were in David’s situation, running for your life, would you kill your enemy?

Why do you think it’s hard to make the right decision sometimes?