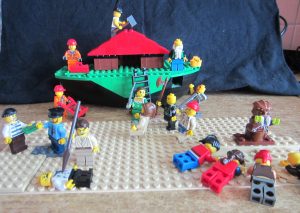 Bible Verse: “The paths of the Lord are true and right, and righteous people live by walking in them.” Hosea 14:9

Sometimes I hear the news and I’m shocked by how evil people can be. It seems like the world is so evil.

There was a time where the world was so evil, God was sorry he made man.  He looked throughout the earth and only found Noah to be living right.  Everyone else in the world was corrupt and full of violence. They looked for ways to do evil.

The people became so bad, that God decided to destroy the whole earth with a flood. He decided to start over with just Noah and his family. Noah had three sons who each had a wife.

God told Noah to build an ark, a huge boat, to save his family and the animals.  His family began to build and collect food for a long voyage.

How did Noah stay righteous in such a world? Following the crowd is easy, almost automatic. Noah believed God. He listened and obeyed the Lord.

Noah was “blameless in his generation.” He stood out from everyone else. He didn’t talk and act and live like the rest of the world. He walked with God, living like God was standing next to him.

No matter where we live, no matter how our neighbors act, we can stay righteous. Noah wasn’t perfect. But he believed what God said, and God gave him help.

Do you see people around you living as though God doesn’t exist?

How do you remember that God is always near you?

Prayer:   Heavenly Father, thank you for choosing me to follow you.  Help me to always keep my eyes on you when things get tough.  In Jesus name I pray, Amen.